With the stroke of a pen, Governor Brian Kemp removed Georgia from a discouraging list of states lacking a hate crime bill. For years now, Georgia has been one of only four states without a law to adequately punish against crimes targeting a person because of bias against a “race, religion, sexual orientation, or gender identity.” The law goes into effect July 1, 2020.

In 2000, Georgia passed a hate crimes bill titled as SB 390 an “Anti-domestic Terrorism Act.” When the bill was introduced by Sen. Vincent Fort (D-Atlanta), protections for “actual or perceived race, color, religion, national origin, ancestry, ethnicity, gender, disability or sexual orientation” were included. By the time it made it to Gov. Roy Barnes’ desk, those protections were removed and substituted with the ambiguous language “bias and prejudice,” creating an unconstitutionally vague law the Georgia Supreme Court invalidated in 2004.

The latest attempt, HB 426, codifies protections for “race, color, religion, national origin, sex, sexual orientation, gender, mental disability, or physical disability.” If the committed crime is a misdemeanor, a sentence between 6 to 12 months and a fine up to $5,000 may result. If the crime is a felony, the sentence is increased to no less than 2 years, but the fine remains the same.

Mentioned in the bill are 5 specific misdemeanors: simple assault, simple battery, battery, criminal trespass and theft by taking. Additionally required is the completion of a “Bias Crime Report” following a suspected incident, “whether or not an arrest is made,” according to the law.

Last March, an initial proposal passed the House 96-64, but sat dormant in the Senate Judiciary committee due to insufficient Republican support. The death of Ahmaud Arbery on February 23 in Brunswick changed the bill’s fate. 15 months later, the bill was moving again, being shepherded by Sen. Bill Cowsert (R-Athens).

Following Arbery’s death, legislators faced newly invigorated calls to take action to pass a hate crimes law. On the day the Gold Dome reconvened following a coronavirus hiatus, the Georgia Chapter of the NAACP organized a demonstration within earshot of the session.

In a press conference on June 17, Lt. Gov. Geoff Duncan criticized HB 426 saying “a simple sentencing enhancement does not go far enough to deter and punish a hate crime” and offered a proposal making a hate crime a standalone charge. The proposal contained potentially ambiguous language that would protect “creed” and “culture” among its mentioned classes.

Instead of adopting this plan, the Judiciary committee advanced the original bill to the full Senate, but not without political wrangling. The plan that emerged included police officers and first responders as protected classes.

In an exchange between Sen. Cowsert and Sen. Harold Jones II (D-Augusta) in a Judiciary Committee hearing, the Republican Senator justified the need to include law enforcement officers as a protected class similar to those included in federal anti-discrimination law. Even though SB 160 “Back the Badge” was signed by Gov. Nathan Deal in 2017 and increased punishment for certain crimes against law enforcement.

“All we’re doing with this Senate version is saying it is also important to protect our first responders…we need these people to help protect us,” Sen. Cowsert said in testimony.

Sen. Harold Jones II (D-Augusta) questioned the inclusion of first responders and in turn mentioned that individuals with mental disability and sexual orientation showed a documented case of being discriminated against by the state of Georgia. “This legislative body has shown over and over that it will protect law enforcement, it is consistently shown that it will do that,” he also said.

The Rules Committee saw fit to remove that language and amend it to HB 838, thus making the bill more politically palatable. At the Rules meeting, Sen. Cowsert announced he had “reached a compromise everyone will be pleased with.” This compromise included the collection of crime reporting statistics.

By the time the bill came up for a vote on June 23, a multitude of passionate bi-partisan speeches had been given in the Senate to garner support. Sen. Cowsert said he could “no longer stand idly by silently” and referenced Sen. David Lucas’ (D-Macon) speech from the prior Saturday. In that speech, he pointed to his skin and questioned “Do you know what it’s like to be like this?,” while also calling attention to the recorded deaths of Ahmaud Arbery, George Floyd, and Rayshard Brooks. 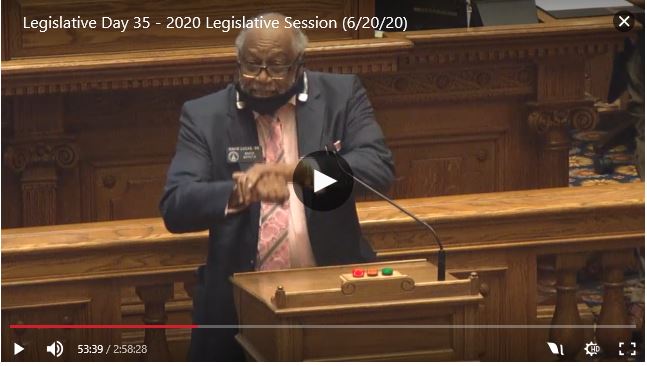 Sen. Renee Unterman (R-Buford) fighting tears, spoke in painful details about being Jewish and facing anti-semitism while serving as Mayor in Loganville. She mentioned threats of kidnapping her son, vandalism to Beth David synagogue, criticism over the work she did with AIDS patients in Gwinnett county, and rushing to dispose of white nationalist literature mailed to her house. In a recent campaign for the 7th Congressional District, she said an opponent, Rich McCormick belittled her faith by asking if she wanted to borrow a sweater for the Christmas parade. McCormick, a physician, defeated Unterman in the recent Republican primary by more than 23,000 votes.

When HB 426 first came to the Senate floor, the bill was engrossed by a slim margin 29-22, meaning no amendments would be made. When it returned later in the day, the bill passed 47-6, with mostly rural and exurban Senators opposing. The bill was immediately transmitted to the House for consideration. Once the House took up the bill, all eyes were fixed on the vote total. As yeas and nays trickled in, it was soon apparent the bill would pass. It cleared the House 127-38, in another strong bi-partisan showing. The opposition again was from mostly rural and exurban districts. 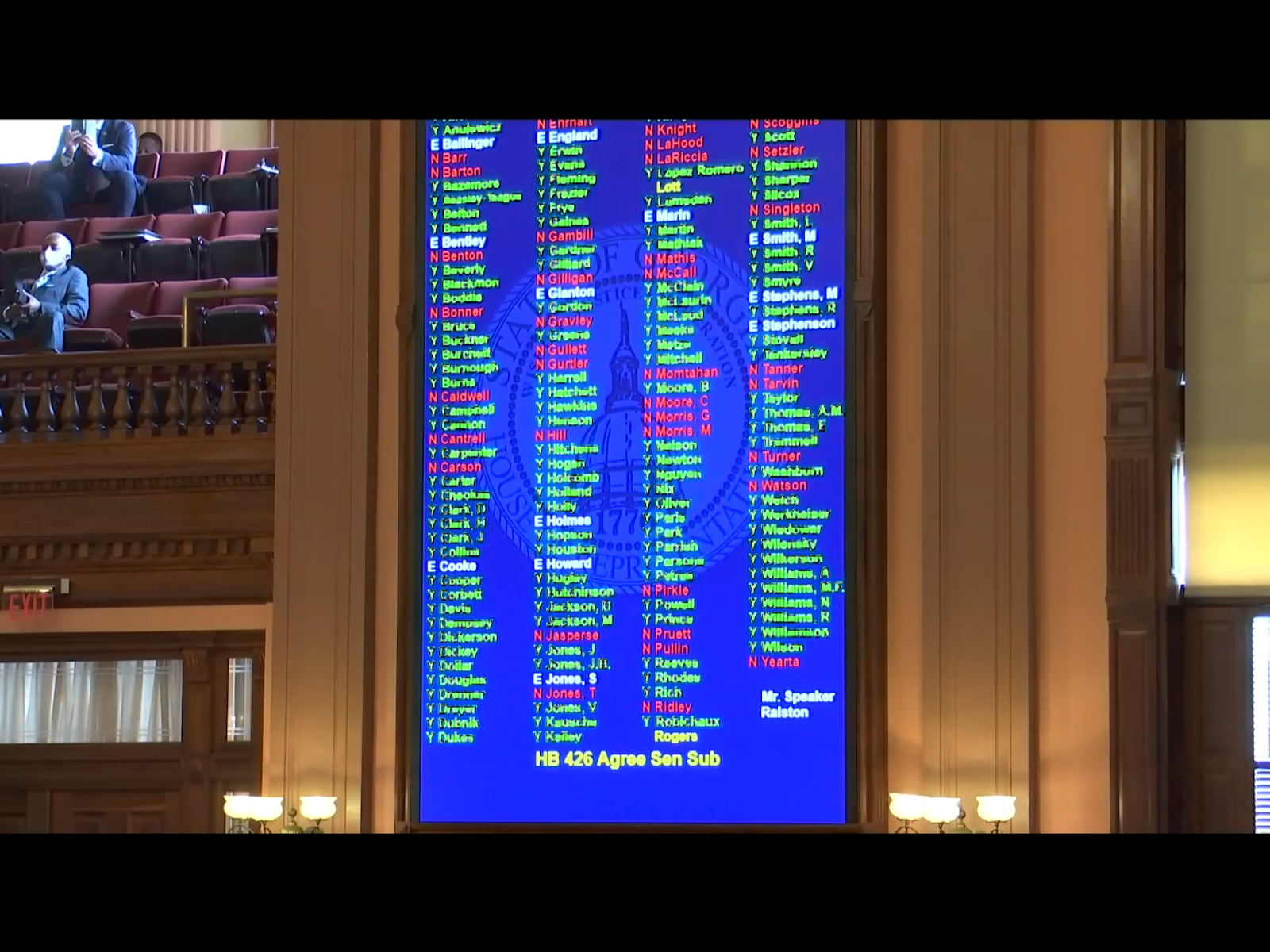 Last Friday Gov. Brian Kemp signed the bill into law and remarked, “Georgians protested to demand action and state lawmakers rose to the occasion.” He continued, “Today we stand together as Republicans and Democrats, white and black, male and female…to affirm a simple but powerful motto: Georgia is a state too great to hate.”

A press release from the Georgia chapter of the NAACP praised HB 426, but was critical of HB 838, which is labeled as a bill of rights for law enforcement. “This compromise in the political process will forever ring throughout history as a signal that Black lives are a bargaining chip toward a political end and dead, black bodies are a expendable commodity in the halls of legislative power,” said Rev James Woodall, State President of the Georgia NAACP.

In the same release, Wanda Cooper-Jones, the mother of Ahmaud Arbery said, “Though we stand in full support of all law enforcement, we believe that HB 838 is more dangerous to our community than HB 426 is good. To see the legislature prioritize HB 838 instead of repealing citizens arrest is heartbreaking and does not do justice for my son.”

South Carolina, Wyoming, and Arkansas remain the only states without a hate crimes law, but three days ago a bi-partisan group of legislators drafted a proposal to “enhance penalties committed proved to be motivated by hatred of the victim’s attributes,” as mentioned on the state Senate website.

***This concludes a series of articles written about the legislative journey of HB 426 on this blog. Previous entires can be viewed here:

With Day 30 Completed, No Movement on a Hate Crimes Bill

New Hate Crimes Proposal Introduced, But Time is Running Out